This past Sunday, I ran the Baystate Marathon in Lowell, MA. Every fall, two of my college friends (Katie and Sarah) and I run a marathon together. In 2015, we ran Richmond, in 2016, we ran Charlotte, and this fall we decided to choose a race up north. I love doing races with my friends – having them at the start line with me makes the atmosphere even more exciting. One Boston friend, Natalie, also ran the marathon with us.

On Saturday we headed to the expo and had a delicious pre-race pasta dinner at my place. No pictures were taken of food because we were way too busy eating 😉 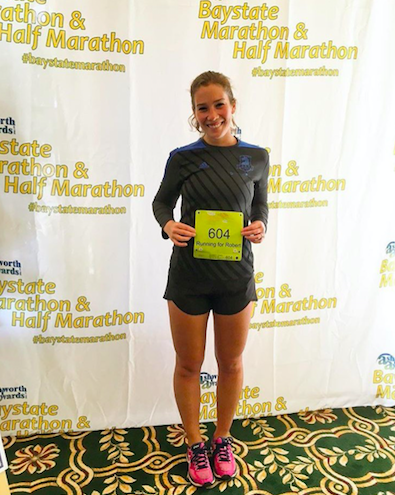 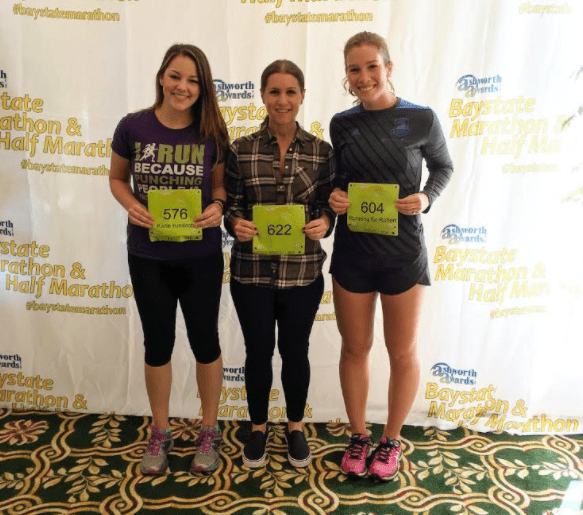 Katie, Natalie, and me.

And on Sunday….RACE DAY!! Originally, the high for the day was 77 degrees, but it ended up being cooler and was the perfect day for 26.2. Alarm went off at 4:30am, carbs, peanut butter, and electrolytes were inhaled, and we left for the race at 6:00am. Kyle and Jeff (Katie’s husband) tagged along and were the best cheerleaders. We got to the race at 7am and it started at 8am, so we just hung around on the grass getting pumped and taking goofy photos. 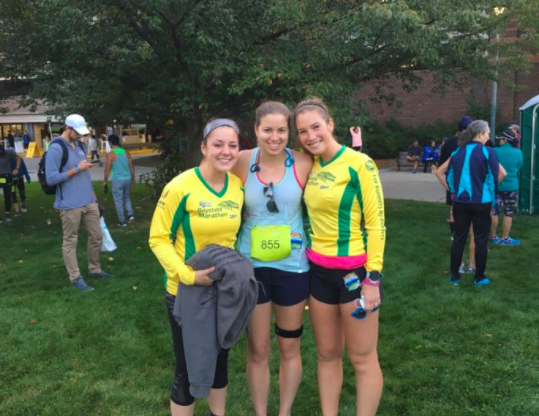 Katie, Sarah, and me 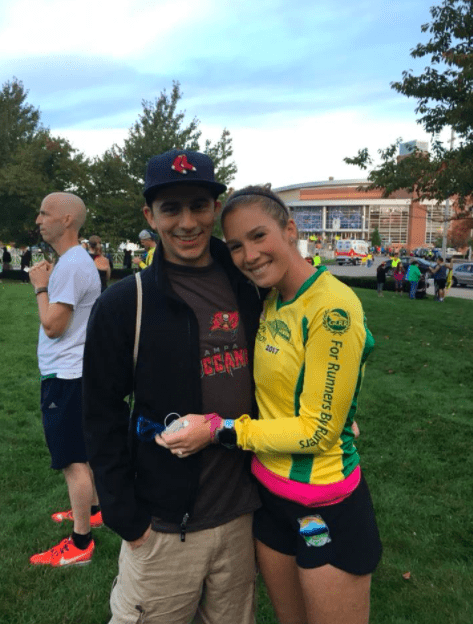 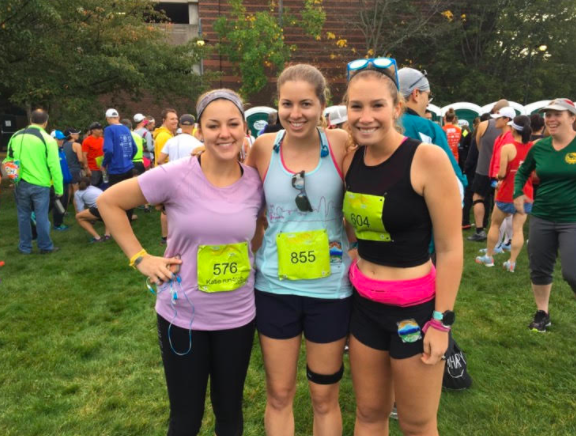 My last marathon was only six weeks ago – Beantown Marathon. I trained so hard to make it a 2018 BQ marathon but that didn’t happen, so I went into Baystate with no time goal and no pace goal. And a BQ was the furthest thing from my mind.

The clock approached 8:00am and we headed to the starting line. Katie, Sarah, and I didn’t really seed ourselves in the pack. We found a spot towards the back and stayed there…and then the race began! WOOHOO!

I started running and my focus for the first few miles was to have alllllll the runners pass me. Yup, I was getting passed left and right! I’ve ran way too many races where I’ve started off too quickly and then bonked and lost time because of it. Not today! I kept repeating to myself, “Hold back, Elizabeth. You need to save as much energy as possible. Just hold back”. And it worked.

During mile 1, I zoned in on the 4:00 hour pace group. “Gotta get in front of them”, I thought. I think it was around mile 1.5 when I slowly passed them and started focusing on the 3:45 pace group. Still, I was taking it slow and easy, focusing on steady breathing and small steps.

As the next few miles passed, I slowly got closer and closer to the 3:45 pace group. At mile 4, I started feeling a blister on my right foot on the inside of my big toe. Running over 20 miles with a blister was going to take strength, but I knew I could do it

Miles 7, 8, and 9 passed, and I still felt awesome. I was having the time of my life crossing bridges, running along water, and scaling the occasional hill which I felt CONFIDENT on! Not scared and intimidated! (If you read my last post here, you know that I don’t want to avoid hilly races, but continue training on hills weekly and feel strong when running them during a race).

Mile 10 came and went and I decided that I didn’t want to be staring at the 3:45 pacer’s neon orange shirt anymore. So I surged about five seconds in front of him and continued on at the steady 8:30 pace on my own.

We crossed the bridge approaching mile 13.1 (halfway!) and I felt SO STRONG! I saw a photographer and started fist pumping. I knew at that moment I was going to have a strong second half of the marathon. I felt so optimistic, confident, and strong. 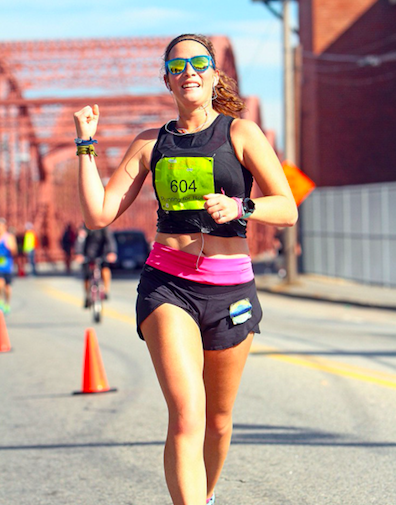 Part of Baystate is a loop, and the loop begins right at mile 13.1. I thought this race was so beautiful with the fall leaves and water, so I was looking forward to running the loop again.

Mile 14 began and I started having the worst side stitch on my right side. Every time one of my feet landed on the ground, it felt like a dagger was going into the side of my rib cage. It hurt so badly. I had to repeat, “Don’t stop running” over and over in my head. Finally, the pain subsided two miles later at mile 16. I think I got the side stitch because I was drinking a cup of both water and Gatorade at each station, instead of just Gatorade which is what I’m used to.

Miles 17-19 came and went. Every time I felt like I was getting a little tired, I told myself to take small steps and increase cadence. I also knew I was keeping steady 8:30 paces because every now and then I would see the shadow of the 3:45 pacer sign right behind me. It was a subtle way of knowing that I was right on track for a solid PR without having to rely on following someone in front of me. 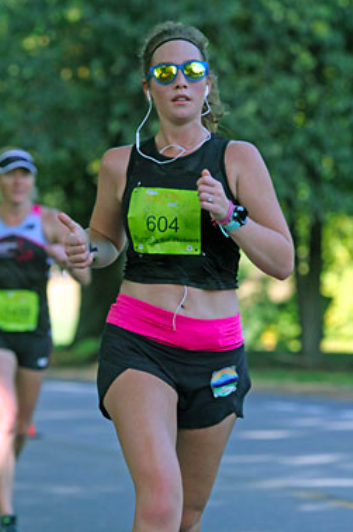 Flashing a quick thumbs up to the photographer

I take a Gu gel every 4 miles, so I carry six in my FlipBelt for a marathon. Mile 20 hit and it was time for my fifth gel. My hands were so sweaty though, so I couldn’t rip it open. I spent half a mile squeezing it, biting it, and trying to rip it but nothing worked. That gel wouldn’t open! So I tried my other gel and thankfully it opened.

And just like that, we were at the last 6.2 miles! The final 10k! And I still felt so strong and good, no sign of bonking or hitting a wall – every marathoner’s dream!

Still feeling pretty good, I repeated to myself, “Just over 2 miles left. YOU GOT THIS! It’s like a warmup mile and a cool down mile….and you’re there. STAY STRONG!”

Don’t get me wrong, my legs were tired. I mean, it’s a marathon. My pace during miles 23, 24, and 25 were a few seconds slower than my other miles, but still well under 9:00 min/mile. The 3:45 pacer and the runners with him were still in front of me and I told myself to keep them in sight no matter what.

And then I started seeing more spectators and people holding signs, I heard cowbells ringing, and finally, I heard someone over a loudspeaker. “I’M THERE!!” I told myself. “I JUST OWNED THE SH*T OUT OF THIS MARATHON! I DID IT!!!”

I ran past gates, saw Sarah’s parents who came to watch, and heard a guy yell, “GO B!!!” I turned, and there were Kyle and Jeff.

I took the final left turn and saw the finish line clock. I finished with a time of 3:44:28, a 3 minute 55 second PR, and less than 10 minutes to go until I run a qualifying time for the Boston Marathon. It’s safe to say I was on cloud nine. 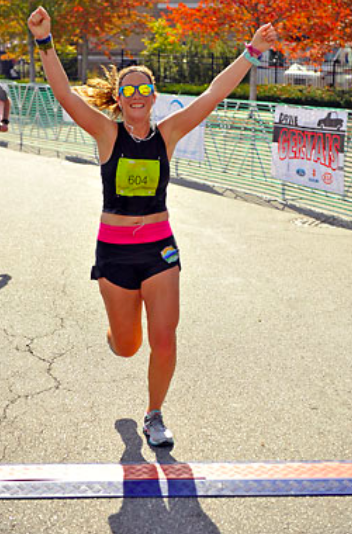 When you realize you just crushed a marathon 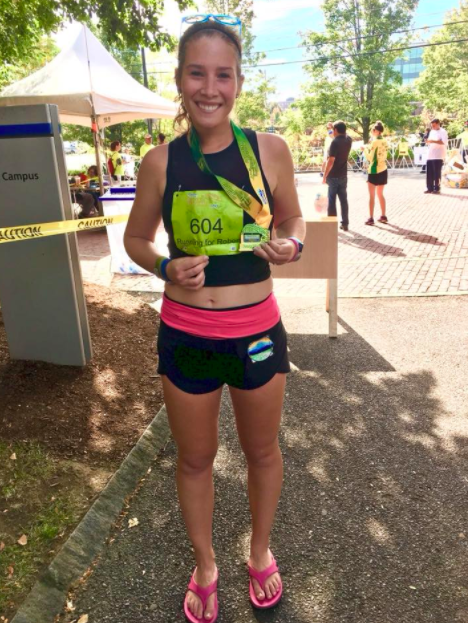 My bib says Running for Robert 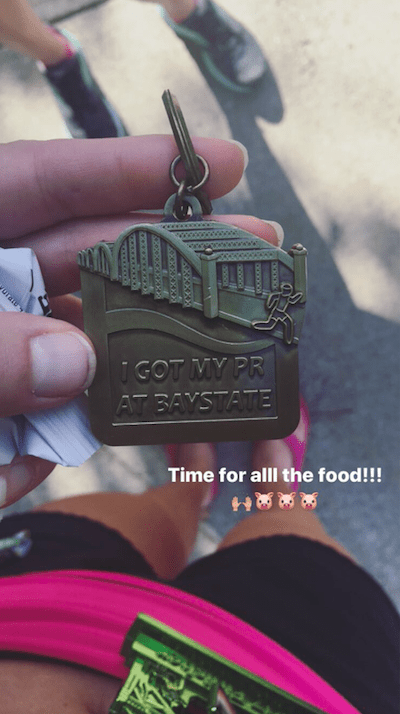 They had PR (and BQ) keychains at the finish line 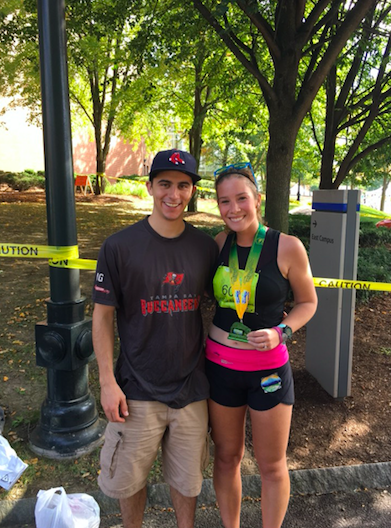 Katie and Sarah finished a little bit later and did so well. I had so much fun spending the weekend with friends and doing something that we love. 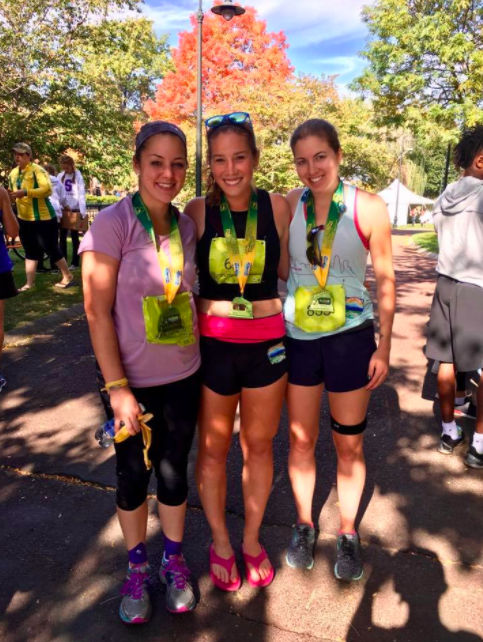 And I am so proud of my evenly paced splits. My next post will be about how I paced this race, and why I tape the face of my Garmin watch during races.

By far my smartest and best executed marathon

We went out for brunch after the race, and later that night went out for dinner, cupcakes at Georgetown Cupcake, and stopped by the Boston Marathon finish line. 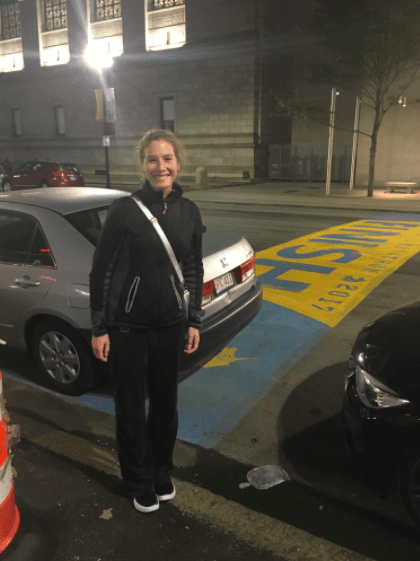 I will be crossing this finish line in April 2019

It was an incredible weekend spent with awesome people. I am so excited for my 2018 marathons and seeing which race Katie, Sarah, and I will run next year. 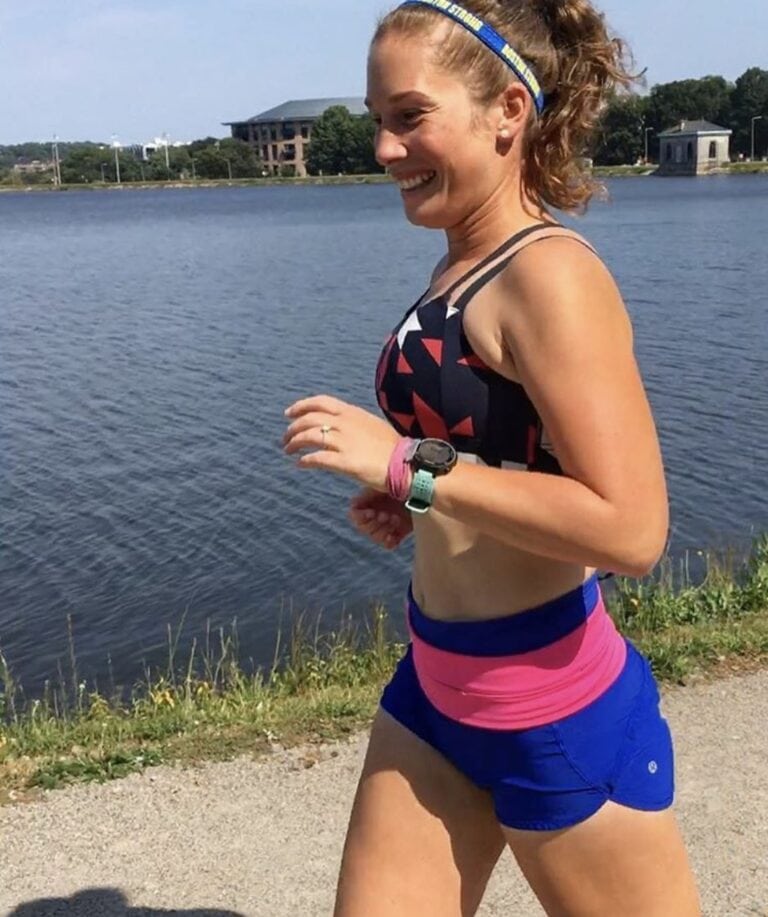 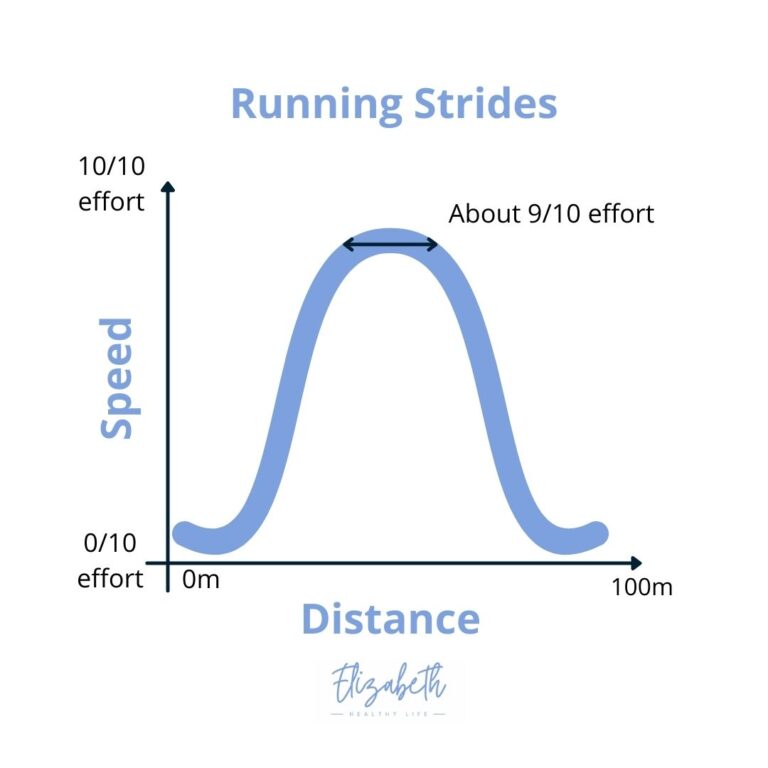 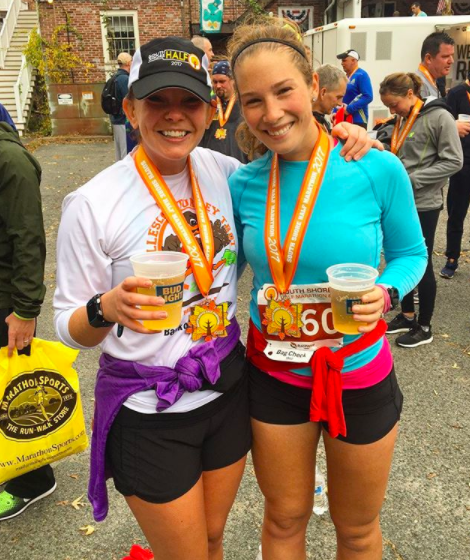 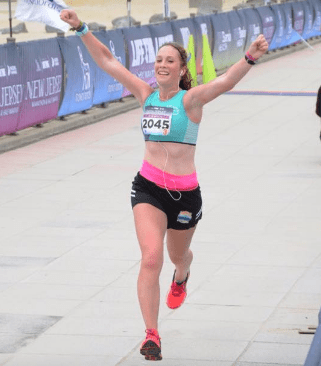 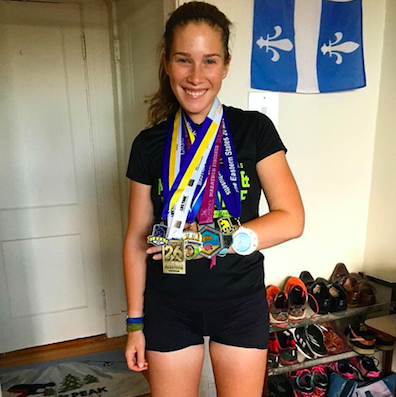 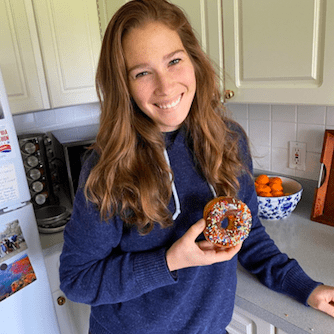 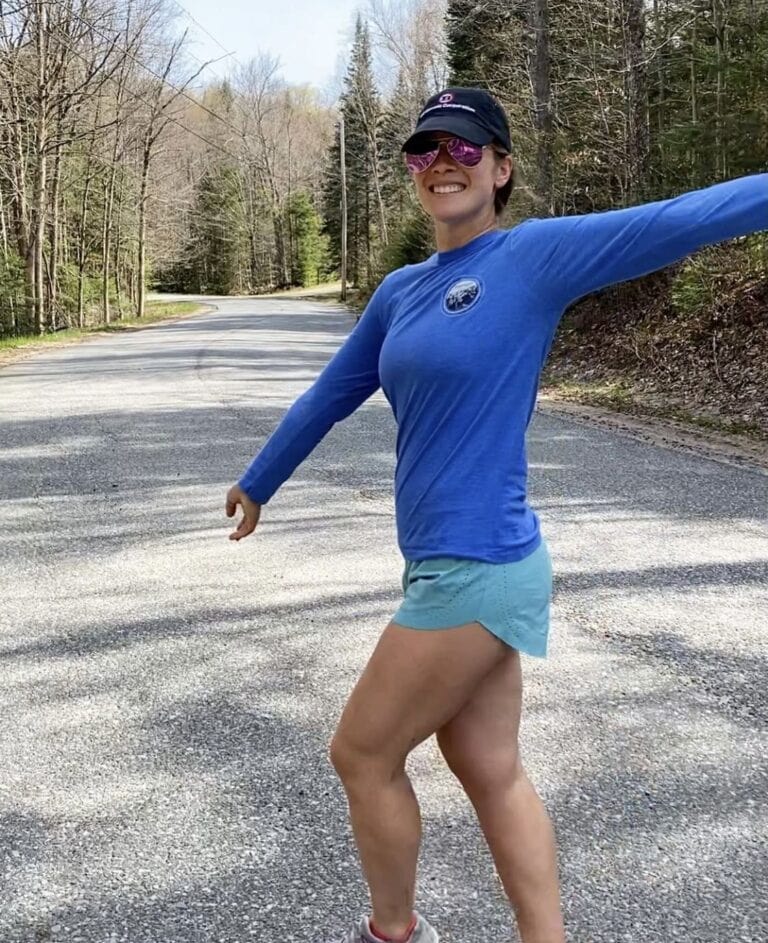